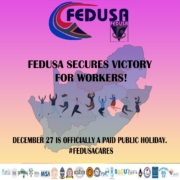 The Federation of Unions of South Africa (FEDUSA) has successfully petitioned the Presidency to grant the country’s workers their rightful amount of rest days this year after the agreement to declare 27 December a paid public holiday.

Months ago, the federation requested that President Cyril Ramaphosa should review the December holidays calendar after realising that Christmas Day is on a Sunday, while Day of Goodwill is on a Monday. Had FEDUSA not intervened, this would have seen South African workers losing out on a paid holiday as the 27th of December would have been an ordinary working day.

We took on this fight considering the challenges facing our members in the retail and hospitality sector among others who would not have had the liberty to enjoy the 12 public holidays as determined by the Public Holidays Act of 1994.

The Act stipulates that whenever any public holiday falls on a Sunday, the Monday following it shall be a public holiday. This means that Christmas Day’s holiday is on Monday the 26th, which is already a holiday, meaning that workers would have been robbed of an extra day on the 27th.

FEDUSA is pleased that President Ramaphosa has heeded the workers’ pleas, further giving us comfort about his commitment to the yet-to-be-realised social compact. As a federation that believes in consultative processes, the decision could not have come at a better time following weeks of discussions with the President’s office over the matter.

Originally, the Day of Goodwill was referred to as Boxing Day. However, as the country ushered in a new democracy in 1994, the name of the holiday was changed as the country overcame its colonial past rooted in British traditions. Since then, South Africans have had the opportunity to enjoy the day unwinding with their families following Christmas festivities.

Albeit this is not the first time that the country has had to deal with this complexity of the holidays falling on multiple weekend days before, FEDUSA is delighted that Ramaphosa has sighed off the public holiday.

We also want to take this opportunity to wish the country’s workers who have worked relentlessly to stave off the possibility of a technical recession happy and responsible holidays.

We applaud FEDUSA members for their sustained calls for the President to declare the 27th of December a paid public holiday. This has amplified the federation’s belief that we can only secure victories through concerted and intentional effort as a collective.

Want to join the discussion?
Feel free to contribute!

FEDUSA Ready to Protest for Decent Salaries For Public Servants

This site uses cookies. By continuing to browse the site, you are agreeing to our use of cookies.

We may request cookies to be set on your device. We use cookies to let us know when you visit our websites, how you interact with us, to enrich your user experience, and to customize your relationship with our website.

Click on the different category headings to find out more. You can also change some of your preferences. Note that blocking some types of cookies may impact your experience on our websites and the services we are able to offer.

These cookies are strictly necessary to provide you with services available through our website and to use some of its features.

Because these cookies are strictly necessary to deliver the website, refusing them will have impact how our site functions. You always can block or delete cookies by changing your browser settings and force blocking all cookies on this website. But this will always prompt you to accept/refuse cookies when revisiting our site.

We fully respect if you want to refuse cookies but to avoid asking you again and again kindly allow us to store a cookie for that. You are free to opt out any time or opt in for other cookies to get a better experience. If you refuse cookies we will remove all set cookies in our domain.

We provide you with a list of stored cookies on your computer in our domain so you can check what we stored. Due to security reasons we are not able to show or modify cookies from other domains. You can check these in your browser security settings.

We also use different external services like Google Webfonts, Google Maps, and external Video providers. Since these providers may collect personal data like your IP address we allow you to block them here. Please be aware that this might heavily reduce the functionality and appearance of our site. Changes will take effect once you reload the page.